Corriganville was a filming site for about 80 years and was the set for films and TV productions such as "Fort Apache", "The Three Musketeers", "The Lone Ranger", "Bonanza", "Cisco Kid" and "Rin Tin Tin". We will see where Corriganville used to be and will be able to make out several of the scenes from old Westerns. Corriganville was recently used as the set of Spahn Ranch in "Once Upon a Time in Hollywood." Film historian E.J. Stephens will be our guide. We will be walking on uneven ground, so wear good shoes, and bring a hat and water.

If these rocks look familiar, it's because you've seen them in the background of hundreds of old movies.

The underwater filming ports in the man-made lake used in "The African Queen".

The History of Los Angeles Graffiti -

Monday, October 18th at 7PM. La Crescenta Center for Spiritual Living. Located on the corner of Dunsmore and Santa Carlotta.

Graffiti written in storm drain tunnels, on neighborhood walls, and under bridges tells an underground and, until now, untold history of Los Angeles. Drawing on extensive research within the city's urban landscape, Susan A. Phillips traces the hidden language of marginalized groups over the past century - from the early twentieth-century markings of hobos, soldiers, and Japanese internees to the later inscriptions of surfers, street artists, and punk rockers.

This image found by Susan Phillips in the LA River was done in 1914 by the famous hobo "A-No.1".

Susan A. Phillips is an American anthropologist and criminologist who works as a professor of environmental analysis at Pitzer College. She is known for research on graffiti, and her books on gangs and graffiti.

Here is that same clip, matched to a film of the same journey, shot last year:

Join us as the Arroyos & Foothills Conservancy (AFC) guides us on an exploration of Rubio Canyon. Discover the history of the Canyon from the Mt. Lowe Railway and Camp Huntington days, and explore the historic trails.

The trail is about a mile long in distance to the waterfalls, but we won't be going that far. We will begin by walking along the old right-of-way of the Mount Lowe Railway to the ruins of the Rubio Pavilion. That stretch of trail is relatively flat. Still, Rubio Canyon itself is steep and rugged. This is a moderate hike, and may be partly in full-sun. Highly recommend to bring water and trail snacks, sun hat, good footwear, hiking poles, sunscreen, etc.... No RSVP is required, just show up by 9 a.m. 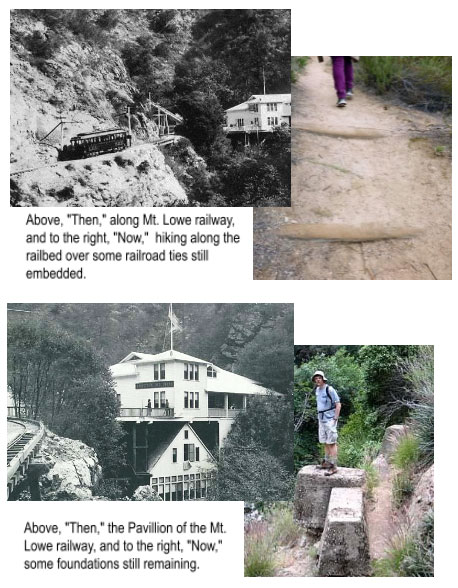 We have two offerings for your viewing pleasure this month, but it may be a bit more challenging to access, bear with us. Check GlendaleParksAtHome.com for the Plants of Deukmejian talk, and check eaglerockhistory.org for the Historic Transportation talk and live panel. We will update as we get more info. Both look very interesting and both are not under our control, so we hope all who want to attend will be able to "zoom-in".

This is a topographic map of the Crescenta Valley from 1928. The ore cart tracks for the Hostetter Graphite Mine can be seen on the far right of the map, about midway down. 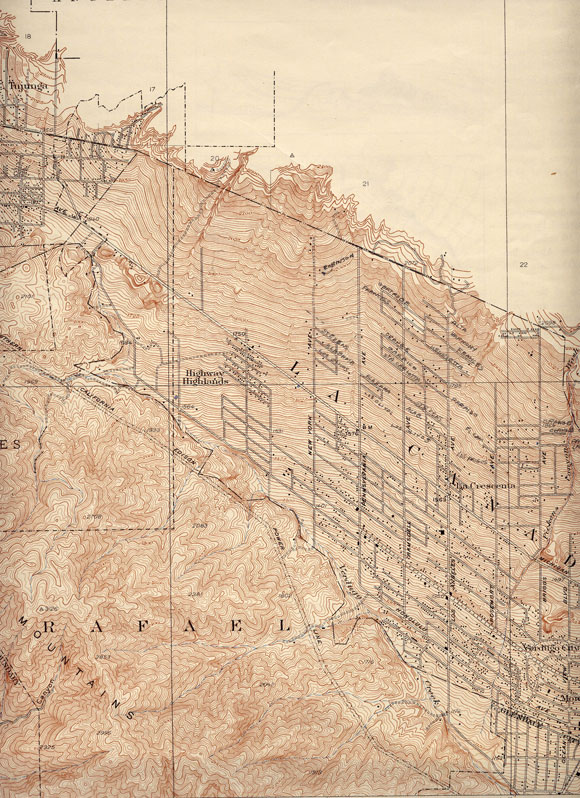 In the 1940s and 50s, when the new Jet Propulsion Laboratory needed quick-thinking mathematicians to calculate velocities and plot trajectories, they recruited an elite group of young women who, with only pencil, paper, and mathematical prowess, transformed rocket design, helped bring about the first American satellites, and made the exploration of the solar system possible. The book (based on extensive research and interviews with all the living members of the team) tells the stories of these women--known as "human computers"--who broke the boundaries of both gender and science.

The Rosemont Preserve, History in the making

This beautiful sanctuary, allows a small portion of our valley's natural history to flourish (plants, animals, ecology...), and invites us to observe this natural history as it renews itself and thrives. We plan to have a monthly featured photo. 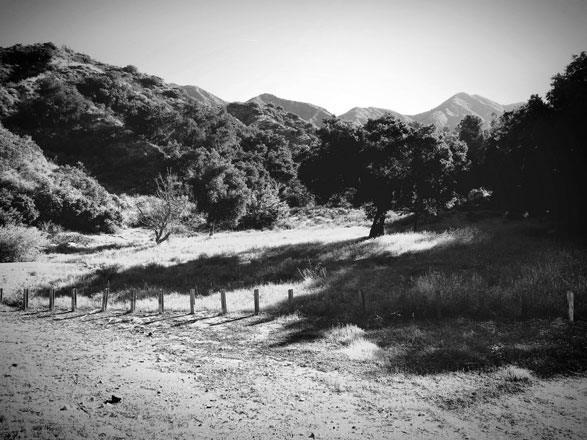 Rosemont Preserve - 8 acres of natural open space at the base of Goss Canyon, acquired for conservation by the Arroyos & Foothills Conservancy in 2012. Stewarded, with the natural habitat fully restored, by the Friends of the Rosemont Preserve, a volunteer group that develops and hosts community programs on the property. Photo by Althea Edwards.

The Rosemont Preserve can be visited on Open Gate days. Docents will be on site.
The next Open Gate Days: Sunday Feb 21st and Saturday March 6th, from 9 a.m. to 11 a.m.
No RSVP is required.

The Rosemont Preserve is located in La Crescenta, at the north end of Rosemont Avenue, just inside the chain link fence. Directions from La Crescenta Avenue and Foothill Blvd (the original City Center as designated by Dr. Benjamin Briggs); proceed east on Foothill Blvd., turn left up Rosemont Ave. Parking is available at Two Strike Park, on the west side of Rosemont Avenue, 2 blocks before you get to the Preserve (5107 Rosemont Ave). If there are mobility issues that require a closer parking spot, please email AFC at arroyosfoothills@gmail.com. As with all hikes, wear sturdy shoes, a sun hat, and bring water. Sorry, no dogs are allowed in the Preserve (to keep the wildlife safe).

Arroyo & Foothills Conservancy and videographer, Denis Callet, has put up wildlife videos from the Rosemont Preserve online. Here are just two of their videos to check out:

Hollywood has long relied on our area for filming location shots. Craig Durst has made another wonderful video in which he shows clips from movies and gives you the exact location where it was filmed. From film classics such as "It Happened One Night" and "It's A Wonderful Life" to more recent films such as "Terminator 3" and "Chinatown", you'll be amazed at the iconic scenes that were filmed in our backyard.

It Happened One Night and It's A Wonderful Life

How many of you have visited the monument to the New Year Flood of 1934? Here's a chance to get out of your house and see something local without the danger of exposure to the virus. The monument was built and dedicated by the historical society in 2004. It has somewhat recently been refurbished by a local scout. It features a plaque describing the tragic events of the 1934 flood, along with a bench to sit on and a variety of plants. The monument is located on the northeast corner of Rosemont and Fairway. There is parking on Rosemont right next to the monument. 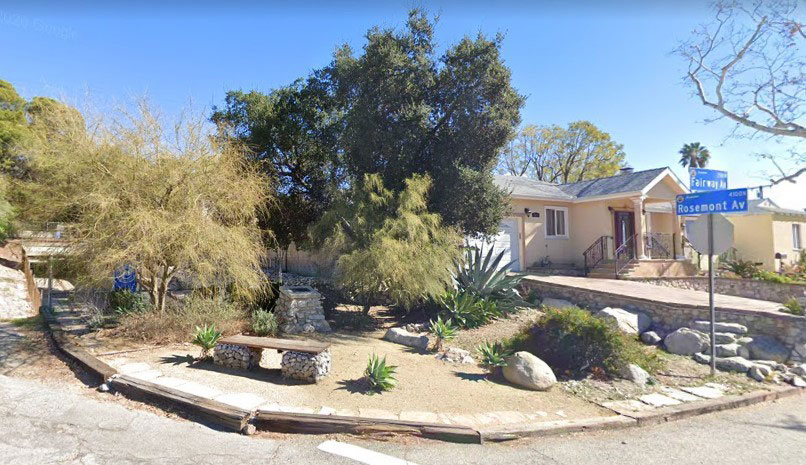 You will find an interview with flood survivor Marcie Warfield who was on this very spot in 1934. Her house was one block above the monument site, directly in the center of where the flood control channel runs today. Listen to her description of that night before you make your visit to the monument. Then take a drive by the American Legion Hall at 4011 La Crescenta Avenue. This is the same building that sat on the site of the monument. It was moved to this location after the flood.

Craig Durst of the Little Landers Historical Society in Sunland/Tujunga has produced another of his delightful history films. This one profiles some of the stone houses of Tujunga, their origins, and a plea to preserve the few that are left. Craig also gives a history of one of the occupants of a Tujunga stone house, the Wieman family. One of the Wieman sons, Tad Wieman became a great football player and college coach, and the film shows footage from some of his games. 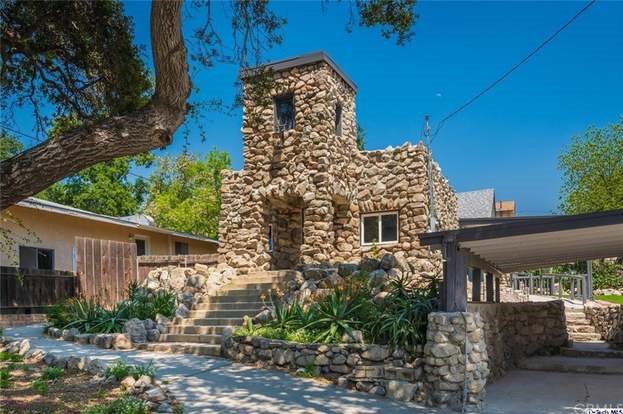 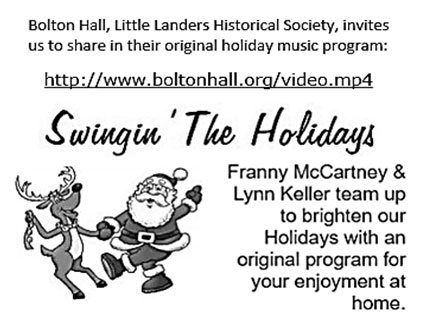 Growing up in Sunland

Growing up in Sunland from Tom Gilfoy on Youtube.

Heritage Square Museum, a haven for historically and architecturally significant buildings, tells the story of early Los Angeles History. A docent will lead you through the grounds of Heritage Square Museum, giving information as you go about our nine historic structures which were moved to the museum including five homes, a train depot, a church and a drug store, our garden, and the grounds.

Heritage Square Museum is located at 3800 Homer Street in Los Angeles off the 110 Fwy, 10 minutes Northeast of Downtown. 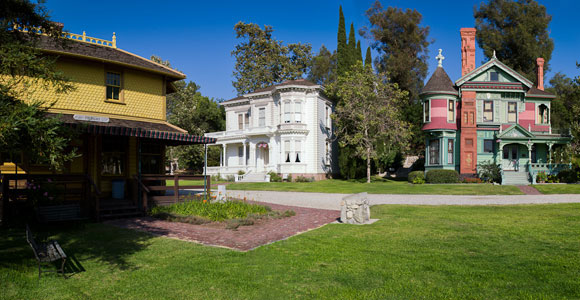 We are proud to be able to debut a beautiful new video by our own John Newcombe. Using archival footage and photos, and gorgeous background music and narration, it details the amazing story of Rockhaven Sanitarium, a place of healing for women in the Crescenta Valley since 1923.

BENEATH THE ROCKS: The Archeological Digs of the Ancient Indian Village of Tujunga

An entertaining video from Tujunga historian Craig Durst about the local Native Americans.

The FLAGPOLE above SUNLAND and TUJUNGA

A wonderful video about two guys in Sunland Tujunga who recently installed a flagpole on the San Gabriel Mountains. Contains some spectacular drone shots, as well as some local history.

The first is about a local stained-glass shop.

Interview with Wally Anderson, whose family has built many homes in the area.

The McGroarty Arts Center in Tujunga.

The American Heritage Library and Museum in Glendale, a museum concentrating on the American Revolution.

Once Upon a Time Bookstore

Montrose Shopping Park in the Movies

And here are a couple of videos about Rockhaven Sanitarium. The first was produced by the City of Glendale over a decade ago (back when they were still enthusiastic about the property). This one actually won an Emmy!

Rockhaven: A Sanctuary from Glendale's Past

This one was produced recently by a group that does paranormal investigations.

A few videos were produced by local historian John Drayman

And lastly, from the 1950 movie "Gun Crazy", the famous bank robbery scene, which was filmed in Montrose.